The objective of this practice is to implement the logic of a navigation algorithm for an autonomous vacuum. The main objective will be to cover the largest area of ​​a house using the programmed algorithm. 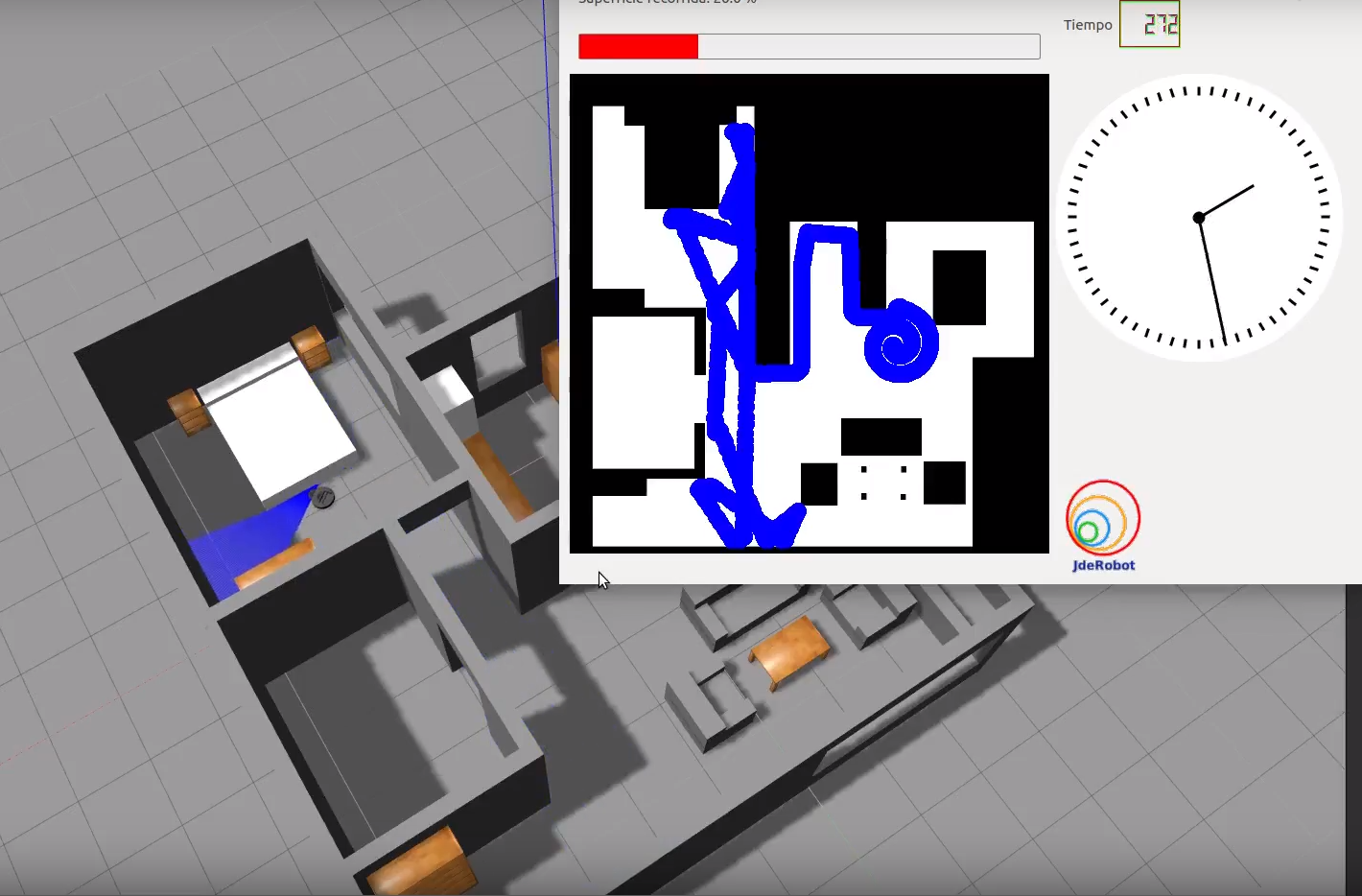 To simplify the closure of the environment, simply close the VacuumCleaner window(s). Ctrl + C will give problems.

To carry out the practice, you must edit the MyAlgorithm.py file and insert the control logic into it.

For this example, it is necessary to ensure that the vacuum cleaner covers the highest possible percentage of the house. The application of the automatic evaluator (referee) will measure the percentage traveled, and based on this percentage, will perform the qualification of the solution algorithm.

Implementation of navigation algorithms for an autonomous vacuum is the basic requirement for this exercise. The main objective is to cover the largest area of a house. First, let us understand what is Coverage Algorithms.

Coverage Path Planning is an important area of research in Path Planning for robotics, which involves finding a path that passes through every reachable position in its environment. In this exercise, We are using a very basic coverage algorithm called Random Exploration.

Uses real-time measurements and decisions to cover the entire area. The Sensor-based approach is included in this category.

The problem of coverage involves two standard basic motions, which are used as a base for other complex coverage algorithms.

The robot follows an S-shaped pattern.

Any coverage algorithm is analyzed using the given criterion.

This influences the optimality of generated paths for each sub-region by adjusting the duration, speed, and direction of each sweep.

This involves the plan to move from one small subregion to another. The coverage is said to be complete when there is no point left to backtrack.

Usually, coverage algorithms generate a linear, piecewise path composed of straight lines and sharp turns. This path is difficult for other autonomous drones like Underwater Vehicles, Aerial Vehicles and some Ground Vehicles difficult to follow. Path Smoothening is applied to these paths to effectively implement the algorithm.

Simple hints provided to help you solve the vacuum_cleaner exercise. Please note that the full solution has not been provided.

The most important task is the generation of a random angle. There are 2 ways to achieve it.

Among both the methods, Random Duration would be a preferable one as the Random Angle requires precision, which requires PID to be achieved successfully.

Also, in order to acheive better precision it is preferable to use rospy.sleep() in place of time.sleep().

Once the direction has been decided, we move in that direction. This is the simplest part, we have to send velocity command to the robot, until a collision is detected.

A word of caution though, whenever we have a change of state, we have to give a sleep duration to the robot to give it time to reset the commands given to it. Illustrations section describes a visual representation.

Using the physical formula $v = r·\omega$ (See references for more details). In order to increase $r$, we can either increase $v$ or decrease $\omega$, while keeping the other parameter constant. Experimentally, increasing $v$ has a better effect than decreasing $\omega$. Refer to illustrations.

Being such a simple algorithm, it is not expected to work all the time. The maximum accuracy we got was 80% and that too only once!

After applying a duration, we get straight direction movement

One possible solution is to implement the logic of a navigation algorithm for an autonomous vacuum without autolocation.