The objective of this practice is to implement the logic of a Gradient Path Planning (GPP) algorithm. Global navigation through GPP, consists of:

With this, it is possible for the robot to go to the marked destination autonomously and following the shortest path.

The solution can integrate one or more of the following levels of difficulty, as well as any other one that occurs to you:

How to run your solution

Navigate to the global_navigation directory

Launch Gazebo with the tele_taxi world through the command

Execute the practice’s component indicating the configuration file for the map:

To carry out the practice, you must edit the file MyAlgorithm.py and insert all the functionality in it.

There are two parts in which the code should be inserted:

This component, is related both to the world and the map. To simplify this, we have a grid object with the following functions:

The Grid class also provides a grid, on which to point the distance to the destination. The values ​​of this grid are float type. The size and positions of the grid match that of the image. To interact with it:

This class also offers another grid on which the path should be pointed once found. Points with value 0 will be ignored, higher values ​​will be considered path. The functions to interact are:

REMEMBER: Once running, double click in any point of the map to set destination, then click on “Generate Path” and finally click “GO” to see the result.

Motion Planning is a term used in robotics to find a sequence of valid configurations that moves the robot from source to destination. Motion Planning algorithms find themselves in a variety of settings, be it industrial manipulators, mobile robots, artificial intelligence, animations or study of biological molecules. 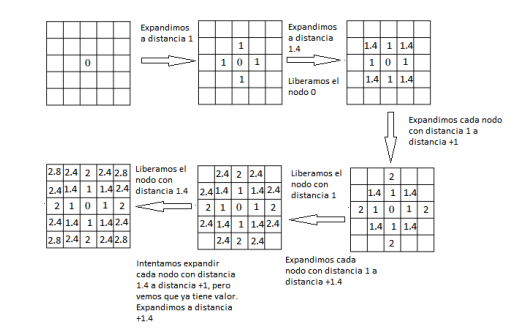 As for obstacles, additional weights are added to the cells that are close to obstacles. Intuitively, the weights represent the superposition of waves that are reflected from the walls of obstacles.

The algorithm stops upon reaching the source. To navigate through the generated path, the robot follows the path indicated by decreasing weights (a downhill drive). A grayscale image representation quite clearly depicts the path the robot might follow! 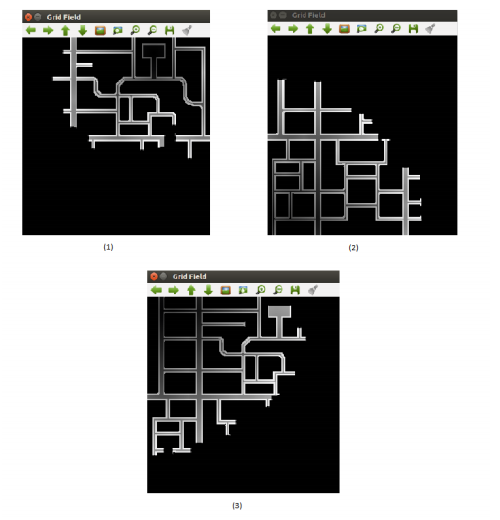 Sampling based Path Planning employs sampling of the state space of the robot in order to quickly and effectively plan paths, even with differential constraints or those with many degrees of freedom. Some of the algorithms under this class are:

These methods work by randomly sampling points in the workspace. Once the desired number of samples are obtained, the roadmap is constructed by connecting the random samples to form edges. On the resulting graph formed, any shortest path algorithm (A*, Dijkstra, BFS) is applied to get our resulting path.

Tree Based Planners are very similar to Probabilistic Roadmaps, except for the fact that there are no cycles involved in tree based planners. There are a variety of tree based planners, like RRT, EST, SBL and KPIECE. These algorithms work heuristically, working from the root node, a tree (a graph without cycles) is constructed.

Simple hints provided to help you solve the global navigation exercise. The hints are focused on solving the exercise through GPP algorithm.

Since, the map has already been divided into grids, we can directly work on the grid! Path Planning involves a BFS based search starting from the destination. The psuedo code for the algorithm is:

Assignment of weights to the cells is arbitrary. Generally, diagonally neighboring cells are assigned a greater weight than the other neighbors. Apart from all the assignment, the additional weight of cells close to obstacles is extremely important, as it is the one that is going to help avoid collisions!

For navigating effectively, we assign local goal points which eventually lead to the final destination. These local goal points can be selected by choosing 2 points, which occur one after the another recursively.

Also, make sure that the selection is done from a big enough radius, otherwise during navigation the robot may pass the grid and reach a local minima.

All in all, the exercise is a little on the tough side. But spending time with this exercise, all the bugs, issues and hints provided may make sense!